Rae and I have learned quite a bit about using Final Cut to create our documentary, Autumn Gem. Here are some tips that will save you a lot of time when putting together your film.

Make sure you backup your video project on a daily basis and have offsite backups. Disaster can strike anytime to your hard drives, and it behooves you to be prepared for the worst.

In the photo to the right, I am taking recent backups of the documentary, system, and photos hard drives off to an offsite location. I rotate through these offsite backups at least one a month. Read this article for more information on my backup strategy.

Do not run Final Cut Pro on your normal Mac OS X user account. Create a separate video user account that has as little third-party software or system extensions installed. This will ensure that your system is running as optimally as possible. If you run FCP from your regular user account, you may experience dropped frames and other oddities that will have you questioning your twenty-year faith in Apple products.

Get out of GOP and embrace ProRes 422

No, this is not a political tip. If you shoot in HDV, consider capturing your footage using the ProRes 422 codec and get out of GOP (Group of Pictures) hell. We did not do this when we imported our tapes, but we have Final Cut Pro configured to render in ProRes and export into ProRes. For reasons too long to explain in this post, ProRes 422 is a much better codec to use for editing and color grading than native HDV. 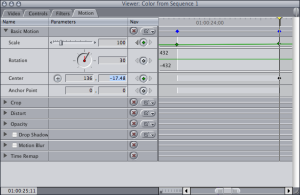 The past several days, I’ve been going through each and every photo in Autumn Gem and resetting these values. Trust me when I say you don’t want to do this after your film has been edited. Do it from the get-go and save yourself a lot of time!

Photos are a stable of many documentaries. At times, a finely detailed photo or an image scanned at a high resolution will exhibit flickering when moving on screen. To resolve this, apply a light gaussian blur filter (I use a setting of 1) to the image. This may seem counter-intuitive to those coming from a photography background (tack sharp!), but remember you’re in the moving picture business now where the rules are different!

I’ve read reports that say to avoid using JPEGs in Final Cut projects because they lead to the possibility of jittering images in interlaced footage. We’ve been using a combination of JPEGs, PNGs, PSD, and TIFF files. So far after using the two tips above, we haven’t seen any issues with our remaining JPEG files. In the future, however, I think I’ll avoid JPEGs altogether and stick with PNGs and TIFFs.

Put an opacity of 90% on your subtitles and captions. This helps avoid any broadcast safe color errors.

Use the Outline Text Generator for your subtitles

I touched on this in an earlier post, but you should set your Mac’s display to 1.8 gamma when using Final Cut. FCP adds gamma to the canvas, making it appear like a display with 2.2 gamma. If your monitor is set at 2.2 gamma, Final Cut will happily add additional gamma. When you get around to exporting your project, you’ll be confused when the picture looks all washed out in QuickTime Player or DVD Studio Pro.

Even if you have your gamma settings right, you may still need to add gamma correction in Compressor when sending to DVD Studio Pro or when performing a web export.

View your footage on a broadcast monitor

If you really want to see what your film looks like, make sure you are viewing it on a broadcast monitor or an Apple Cinema Display with a Matrox MXO scan conversion device ($999). With the MXO, I can color grade with confidence, knowing that what I see is eventually what I’ll get when I send this to the post-production house for conversion to HDCAM and DigiBeta1

Note, if you get an MXO, you’ll want to calibrate the secondary display to 2.2 gamma. This seems to fly in the face of the previous tip, but it’s the correct thing to do when using the MXO. Read more about configuring and using the MXO on Ken Stone’s Final Cut web site.

1 At least that’s what I’m hoping for, as we are planning to do the transfer to HDCAM next month!