We’re just a few hours away from flying off for our first international tour of Autumn Gem! This evening we’ll be taking to the skies to head Down Under for eight screenings of Autumn Gem in Sydney, Melbourne and Canberra, Australia.

With a new trip comes new gear for travel! We’ve learned a lot from our two previous tours to the Midwest, East Coast and Southwest. Our current goal is to be able to bring one carry-on bag that can fit under the airplane seat! With that in mind, I’ve adjusted our gear list with the following new additions. Here’s a photo of mostly what I’m taking with me on the trip. 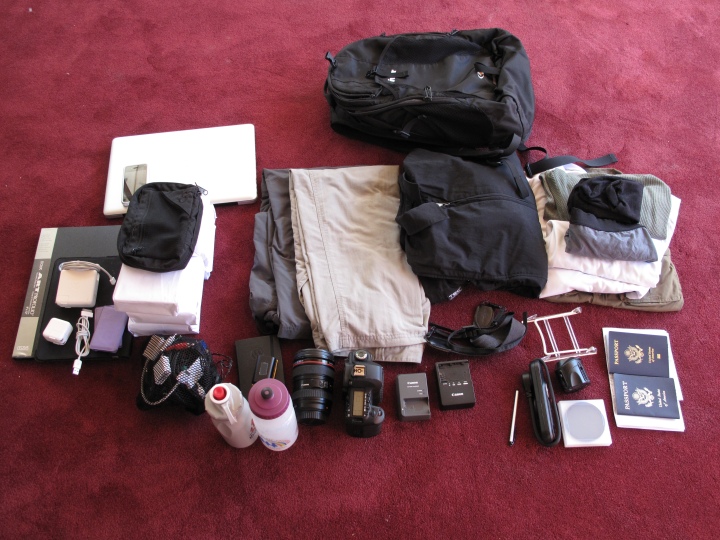 END_OF_DOCUMENT_TOKEN_TO_BE_REPLACED

This weekend, Rae and I saw and enjoyed Up in the Air. Being a packing fanatic, I liked seeing George Clooney’s character pack efficiently for his trips. Each time I travel, I endeavor to travel lighter, smarter and faster.

We’re just a few hours away from our Spring 2010 Autumn Gem tour! This time around, we’ll be traveling for two and a half weeks, heading to Las Vegas, Arizona, Maryland, Boston, New Jersey and New York. We learned a lot about what to pack and what not to pack during our last tour in October, 2009. We’re leaving the rolling Pelican case at home; while it’s durable and can hold a lot of stuff, but it’s sure and tiring to drag around everywhere!

Rae is bringing her REI Traverse 30 backpack once again. As for me, I’m replacing the Rickshaw Medium Commuter Messenger Bag with my LowePro CompuTrekker AW backpack. I did a lot of online research and hands-on testing of backpacks at the local REI store, but I kept returning to the CompuTrekker. Yes, it’s kind of bulky due to its rigid, foam-padded frame, but it can carry a surprising amount of gear, including my laptop in a separate, padded compartment. It’s reasonably comfortable, aided in part by its sternum strap and waist belt, and it has a stowaway rain cover. This might come in handy if the weather gets wet on the East Coast. I’m putting my clothes, DVDs, camera, lens, flash, and various cables in the main compartment. The outside compartment will hold pens, surveys, and other documents. Rae is going to have to fit her laptop in her backpack, but that shouldn’t be a problem since she won’t have to carry any of my clothes.

I recently purchased a Microfleece Hoodie from SCOTTEVEST. I’ve long wanted to try out Scott Jordan’s products, and this trip gave me that opportunity. The hoodie has 11 pockets, and believe me, I’m going to use most of them! The weather in the Bay Area has warmed up significantly, so it’s a bit too warm to wear during the daytime. It stands to be colder where we’re going, so the hoodie should be perfect. I also bought a Ribz vest, but I feel it’s more suited for a backpacking trip than this film screening tour. I may experiment with the Ribz during my next photography gig, however, as it allows for quick access to gear front the front.

Traveling with one bag is a liberating experience. I love not having to wait in line at the baggage claim for our luggage, and I take pride in being able to fit everything I need underneath the airline seat. One of my dreams is to travel extensively with no more than what’s on my back. Ideally, if I could travel with no carry-ons, I would!

Update March 31, 2010: A quick update now that we’re traveling on tour right now. I didn’t quite get it down to one bag for me personally. I’m also carrying an REI Flash UL convertible backpack as a daypack and a clothes carrier. I couldn’t fit both the DVDs that we’re selling and my clothes into the CompuTrekker AW. Sometimes the clothes go into the backpack and sometimes the DVDs are in the Flash. As we sell through our lot of DVDs, more space will become available in the CompuTrekker, and my goal is to fit everything into that by the time the tour ends next week. I’m also routinely carrying Rae’s laptop and my laptop in the back pouch of the CompuTrekker (yes, two MacBook Pros can fit in there!). In addition, we sometimes travel with some food, drinks and snacks, which we carry in a plastic or paper bag with us. Still, traveling with one and a half bags is a whole lot better than lugging around a rollable suitcase. We’ve gotten a number of compliments on our packing strategy!

Now that our tour is over, we’ve identified some things we would have changed regarding our packing strategy (see photo to right). We often felt like we were a rock band traveling the country during this tour. Unfortunately, we didn’t have any roadies to help carry our gear! So, because it’s just the two of us, we have to be extra vigilant and ruthless with regards to what we bring with us. 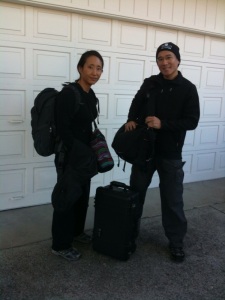 If you recall from our previous post, Rae carried our clothes and toiletries in her REI Traverse backpack, and I carried all the computers, mobile Internet, camera flash, and power adapters in a Rickshaw Bagworks Medium Commuter Messenger Bag. We took turns dragging around a single Pelican 1510 Carry-On Case that contained 300 DVDs, assorted cables, papers, and my 5D Mark II camera. So, what worked and what didn’t?

For starters, we would try to leave the Pelican at home next time. While ultra-durable and somewhat capacious, it’s also quite heavy and bulky to travel with. When fully loaded, the 1510 tired one’s arm after prolonged periods. Similarly, the Rickshaw bag held a surprising amount of gear, but it too became very heavy to wear over time, even with the critical cross strap (used to distribute the weight more evenly on my body). For the next trip, I think I would try to load everything into my LowePro CompuTrekker AW camera/laptop backpack. I would have to reduce the number of DVDs that we bring with us, but at least 120-140 would fit comfortably along with one computer, my camera, flash, cables, modem and accessories.