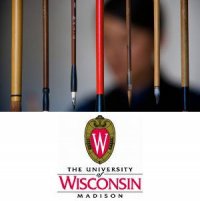 We had an intimate screening at the University of Wisconsin-Madison today; though there were not many people who showed up, those that did asked some great questions. One was whether Qiu Jin was viewed as more of a nationalist or feminist? In China and Taiwan, people are taught in school about Qiu Jin’s revolutionary work more so than her feminist work. In our film, we argue that you can’t really have one without the other. In order for China to become a strong nation, women had to rise up from their oppressed status. Another question was how we found out about Qiu Jin’s grand-nephew? We didn’t use Facebook, that’s for sure, but we did use existing networks of friends and their friends to locate him.

Earlier in the day, we walked around Madison, stopping by the State Capitol and the Overture Center for the Arts, which had a nice exhibition of Robert Rauschenberg’s Stoned Moon Series. Within a month after the moon landing in 1969, Rauschenberg created a series of 34 lithographs commemorating the event. What he painstakingly did back in 1969 was exactly what we can do so easily today in Photoshop using multiple layers and the overlay blending mode. Qiu Jin and Rauschenberg, in their own ways, were both pioneers of their times!

Following the screening, we went to the Kabul restaurant for dinner with Tanya, along with David from the Center of East Asian Studies (who co-sponsored the event) and my friend Erika from college. While it’s great to travel around the country screening our film, it’s equally rewarding to reconnect with friends and relatives whom we haven’t seen in years. Facebook lets us keep in touch with people virtually, but there’s no substitute for face-to-face interaction!

Here are the photos from the screening.