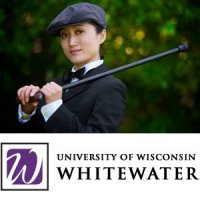 Last night, we had a good turnout of about fifty students and faculty members at the University of Wisconsin-Whitewater. Winther Hall 2001 had two screens, so if you crossed your eyes, you would have thought you were watching Autumn Gem in 3-D!

The first question asked from the crowd was how we financed the film; Autumn Gem was (and still is) solely financed by the two of us; that’s one reason why we’ve devoted a section of our presentation to fundraising. We’ve been able to recoup some of the production and marketing costs through private donations, but we’ve still got a long way to go. All donations to Autumn Gem are tax-deductible, since the film is fiscally sponsored by the San Francisco Film Society. If you’d like more information on supporting Autumn Gem, visit our support page.

Another question was whether or not Qiu Jin ever saw her family after leaving for Japan. The answer is no; she died without ever seeing them again. Two years after her death, her husband died. Their son was raised by the husband’s family, and the daughter was raised by Qiu Jin’s family. Her daughter was only two years old when Qiu Jin left, but she grew up and eventually wrote several biographies of her mother. We’re aware that Qiu Jin’s granddaughter lives somewhere in the United States, but we’ve been unable to locate her; if anyone reading this can get in touch with her, that would be great!

Here are some photos from the University of Wisconsin-Whitewater screening of Autumn Gem.

2 thoughts on “Screening at University of Wisconsin-Whitewater”