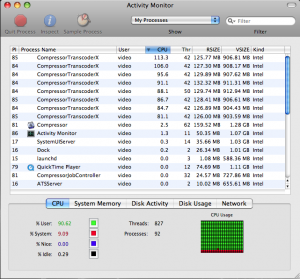 Here’s a screenshot from the Mac OS X Activity Monitor showing all eight cores on our Mac Pro working hard to encode Autumn Gem into a DVD. Our documentary is about 60 minutes long, and it takes roughly two hours to perform a 2-pass MPEG-2 encode.

As of today, we’ve created five different cuts of the film, each one leaner and more representative of the final cut. We’ll soon be calling picture lock on the film, which means no more edits. At that point, the audio will be sent for final mixing and I’ll complete my color grading. We still need to ADR a few scenes, which we plan to record over the next few weeks.

Then, we’ll move onto the next phase, which is figuring out how (and how much it will cost) to get the documentary transferred onto a format suitable for exhibition. Last night, we watched the latest cut on our HDTV, with video piped in from my MacBook Pro. The footage looked fantastic, and I really hope that we can get the picture to look like this on DVD and on HDCAM and DigiBeta (the preferred film festival exhibition formats these days). With the last few DVDs that we’ve produced, I’ve noticed that the colors are more washed out when compared to the Final Cut version. As a result, I’m experimenting with different settings in Compressor, raising the bitrate and dialing in some gamma correction. Eventually, the right combination of settings will come to me!

I’m pretty happy that we’ve been able to stay close to our original project schedule. Six months of pre-production, six months of production, and another six months of post-production. Next year, we’ll be shifting our focus more towards marketing, business development, and screenings. We can’t wait to start screening the film to the general public!